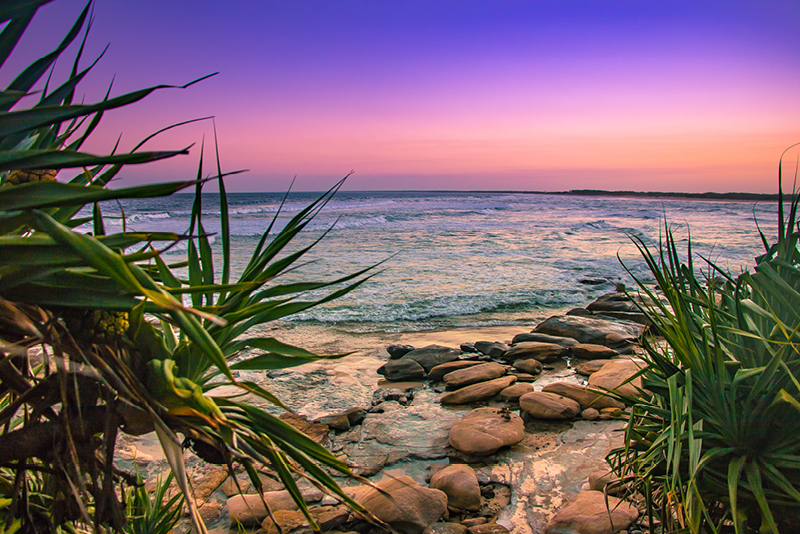 While escaping to a seaside hamlet like Caloundra has been on the minds of many, what is living in this Sunshine Coast village really like according to a local?

While the Sunshine Coast is a term used to describe a region packed with beaches, resort towns and even the hinterland, Caloundra is arguably one of the fan favourites. Regarded as the southernmost point of the Sunshine Coast, you would be hard pressed to find a long term resident of South East Queensland that hasn’t spent at least one long weekend or a summer holiday at this relaxing seaside village.

From the pristine waterways of the Pumicestone Passage to ocean pools and rolling surf, Caloundra has long been regarded as a beach lover’s dream. While downtown Caloundra is buzzing with it’s fair share of trendy cafes, street art, boutique stores and attractions, the neighbouring suburbs of Moffat Beach, Dicky Beach and Golden Beach have long been havens for couples after a seaside escape and families looking to unwind. As the owner of Sunshine Coast Cleans and a long time local, Rachel certainly understands the appeal.

“Caloundra just has something special about it, and living here almost feels like everyday is a holiday – especially since the town has somewhat of a vintage feel to it. You don’t have the same density of high rises that some of the other regions of the Sunshine Coast has, so walking down Bulcock Street with an ice cream in hand almost feels like a throwback to your childhood. It’s changed a lot in recent years though, and there’s a lot more young people living in Caloundra compared to the amount of retirees just a few years ago.”

Rachel’s Top Picks For Things To Do In Caloundra

Since Rachel and her husband Adam have spent most of their adult life exploring the many pockets of the Sunshine Coast, it’s fair to say that she’s accumulated a few preferred ways to pass the time when she’s not busy at work. Whether you’re also a longtime local or perhaps just stopping by, Rachel vouches for the following as must do’s while in the area.

Caloundra Music Festival – Every October at Kings Beach, Caloundra truly comes alive and welcomes guests from all corners of the nation to celebrate a diverse lineup of entertainment that includes both domestic and international artists.

A Day At The Beach – ‘Caloundrians’ really are spoilt for choice when it comes to accessing some of the best beaches in Queensland. Pack a brolly, towel and of course sunscreen, and spend the day at havens like Moffat Beach, Kings Beach, Golden Beach or Dicky Beach.

Visit A Market – Caloundra is home to many popular markets in the region, with the Sunday morning Caloundra Street Fair being a weekend ritual for locals and visitors alike. On the last Friday of the month, there’s also the Twilight Market on the Esplanade to explore too.

Live Music At Drift Bar – Featuring delicious views, a stunning menu and live music almost every day, this seaside Caloundra icon will pull you in from the street with its enchanting décor and the friendly faces of locals.

Caloundra Coastal Walk – Whether you want to conquer the entire twenty five kilometre stretch or perhaps just a portion, be sure to keep an eye out for birdlife and dolphins in Pumicestone Passage, or check out the historical Military Jetty used for operations during World War II.

For many years, Australians have continued to flock to this coastal hamlet for all of the above attractions and more. Along with a series of regular visitors who have often been coming to this part of Queensland for generations, Caloundra is also a popular destination for retirees, families, couples and young people alike thanks to its reputation as being a calm, relaxing and safe place to live.

As such, it’s no surprise that moving to Caloundra is on the minds of many, particularly given our current global climate. At the end of the day, lifestyle is everything – especially if you’re considering joining a community of like minded individuals such as those found in Caloundra.

Sunshine Coast Cleans has been a labour of love for Sunny Coast locals, Rachel and Adam. Although both had been heavily involved in the professional cleaning, hospitality and administration in Queensland and right around Australia for almost three decades, they noticed a significant gap between the needs of their community versus the quality of work that was on offer in the area for things like bond cleans, builders cleans and even commercial cleaning.

If you’re on the move around the Sunny Coast, for many people this means the end-of-lease clean, and finally facing up to the monstrous dust clouds and terrifying patches of mould you’ve spent the past year convincing yourself don’t exist. However, Rachel, Adam and the entire team at Sunshine Coast Cleans are local industry professionals that are able to offer an alternative to dealing with this yourself. For first time clients on the hunt for our region’s best bond clean providers, we even offer a 10% discount.

To request a quote for our available Caloundra bond cleaning services or what specific types of cleaning we offer, please get in touch with us today to discuss how our locally based team can solve your cleaning conundrums.

What Locals Still Love About Noosa

A Local’s Guide To Maroochydore