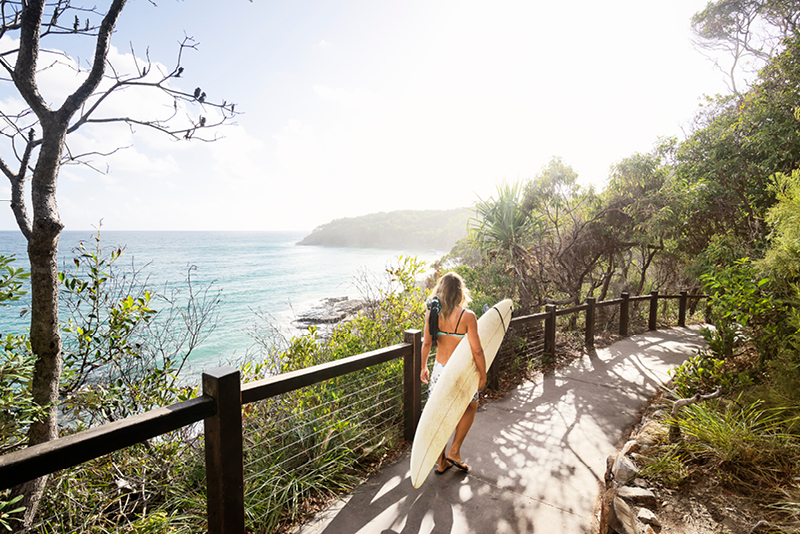 While living in Noosa is regarded as a luxury only for the rich and famous, according to a few long-time locals – that couldn’t be further from the truth.

Tucked away from the Bruce Highway amidst a medley of estuaries, lakes, national parks and of course beaches, lies Noosa – the northern jewel in the crown of the Sunshine Coast region. A mecca for tourists and retirees alike, it’s laid back beach style, subtropical climate and resort town feel has managed to attract residents from all walks of life.

For many, the epicentre of this region is Noosa Heads, where the forest meets the sea. Its main beach and its smaller surrounding bays spread around the headland are common surfing locations, many of which are known on world surfing circuits.

In the 1800’s, Noosa’s early wealth came from the timber and milling industries, with tourism not developing as a fully fledged, stand alone industry until the late 1920’s. In this decade, cafes and tourist accommodation began to pop up along the beachfront, and formed the foundation for what we now know as the iconic Hastings Street stretch. Now, this ritzy stretch is home to some of the most expensive real estate in Queensland, so tourists would be forgiven in thinking that Noosa is only home to the rich and famous.

However, that’s simply not the case. Once you dare to venture away from the main commercial precinct of Noosa Heads, the surrounding suburbs of Sunshine Beach, Tewantin and Peregian Beach still offer plenty of affordable and attractive reasons to call this part of Queensland home. As the owner of Sunshine Coast Cleans and a long-time local, Adam certainly understands the misconception that there’s nothing for locals to love about Noosa anymore.

“Noosa is very different to what it once was just ten years ago. Sydneysiders seem to just love the place, and flock here in droves – especially during the winter months. However, if you take a minute to explore the area away from the action of Hastings Street, you can still find plenty of options when it comes to cafes for the everyday man, affordable accommodation, and things to do that don’t involve forking out for jetski hire. It’s still a wonderful place to live if you know where to look to find the good stuff that makes the area a viable spot to call home.”

Adam’s Top Picks For Things To Do In Noosa

Since Adam and his wife Rachel have spent most of their adult life exploring the many pockets of the Sunshine Coast, it’s fair to say that he’s accumulated a few preferred ways to pass the time when he’s not busy at work. Whether you’re also a longtime local or perhaps just stopping by, Adam votes the following items as must do’s while in the area.

Noosa Surf Club – If you want to experience the glitz and glam of Hastings Street without having to sell a kidney to afford it, then the good news is that the local Noosa Surf Club offers tasty feeds, beers and the best view in town right on the beach.

Get Back To Nature – Just a short drive away from the main foreshore lies Noosa National Park. This hidden gem features the spectacular coastal scenery of the headland, the famous Fairy Pools, and views over nearby areas such as Lake Weyba, Peregian and Coolum.

Explore Noosa Farmers Market – While most are already familiar with the neighbouring Eumundi Markets, did you know that Noosa is home to a regular Sunday farmers market that is rapidly gaining attention for all the right reasons? Hint, make sure you visit whilst hungry.

Give Surfing A Try – If you’ve ever wanted to learn how to surf properly but have been unsure how and where to do so, then the good news is that there are plenty of operators that run half day programs right on the beach in front of Hastings Street.

Kayak The Everglades – The Noosa Everglades extend out for over sixty kilometres, and is one of the area’s best kept secrets. This unique environment is also home to a diverse array of local fauna and flora, all of which are waiting to meet you via kayak.

As such, if you’re willing to explore off the beaten track and away from the main tourist attractions found at Noosa Heads, there are plenty of quieter beaches, up and coming boutiques, and seaside cafes in the surrounding suburbs.

In saying that, it should come as no real surprise that moving to Noosa is on the minds of many, particularly given our current global climate. At the end of the day, lifestyle is everything – especially if you’re considering joining a community of like minded individuals such as those found in Noosa and its neighbouring suburbs and villages.

Sunshine Coast Cleans has been a labour of love for Sunny Coast locals, Rachel and Adam. Although both had been heavily involved in the professional cleaning, hospitality and administration in Queensland and right around Australia for almost three decades, they noticed a significant gap between the needs of their community versus the quality of work that was on offer in the area for things like bond cleans, builders cleans and even commercial cleaning.

If you’re on the move around the Sunny Coast, for many people this means the end-of-lease clean, and finally facing up to the monstrous dust clouds and terrifying patches of mould you’ve spent the past year convincing yourself don’t exist. However, Adam, Rachel and the entire team at Sunshine Coast Cleans are local industry professionals that are able to offer an alternative to dealing with this yourself. For first time clients on the hunt for our region’s best bond clean providers, we even offer a 10% discount.
To request a quote for our available Noosa bond cleaning services or what specific types of cleaning we offer, please get in touch with us today to discuss how our locally based team can solve your cleaning conundrums.

A Local’s Guide To Maroochydore

Caloundra According To A Local